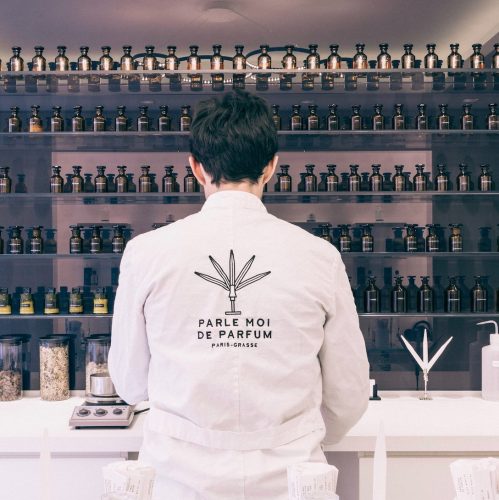 As regular readers know, we occasionally like to ask fragrant figures which are their favourite smells in the world. So a few weeks ago, when Benjamin Almairac breezed through town to unveil some newness created for their brand Parle Moi de Parfum by his legendary perfumer father Michel Almairac, we chatted to him about his ‘touchstone’ smells.

There’s very little that’s truly conventional about this perfume house – notwithstanding the perfume credentials of Benjamin’s distinguished papa, who is famed for conjuring up fragrances including   Bottega Veneta Eau de Parfum (2011),Chloé See by Chloé (2013),  Jimmy Choo Man Ice (2017) and earlier this year, the sublime new Van Cleef & Arpels Santal Blanc, among dozens of others.

Parle Moi de Parfum brings us the fragrances Michel has dreamed of creating over the decades of his career, now offered through a brand he set up with his two sons, Romain and Benjamin. Whether they cause you to raise an eyebrow – or smile – they’re certainly interesting choices…

1. Sniffing glue. In France, when you are young and at school you use a glue stick and you feel like you’re becoming a young junkie at seven years old because basically everyone in your class is sniffing glue.

3. Petrol. Specifically two-stroke engine mixed oil petrol, which is specifically for motor bikes – not classic petrol – which you use for an old scooter or a motor bike. It takes me back to when I was a kid and I used to fix motorbikes with my father in the south of France, where there are plenty of spaces in the mountains to ride on them.

4. Fresh laundry. Who doesn’t love the smell of fresh laundry? Everybody does.

5. The air in Shanghai. I spoke to a lady this morning who was born in Shanghai, where I used to live, too. It reminded me that there is a special scent of the atmosphere in this Chinese city. It’s hard to put my finger on exactly what that smell is, but it’s full of contrasts: clean but dirty, polluted but fresh. There is the scent of a lot of flowers, and the aroma boiling rice rice everywhere. And actually, I find that in each city I go to, there is a different scent. For London, for Paris, for Delhi. (The last of which is definitely not so nice…)