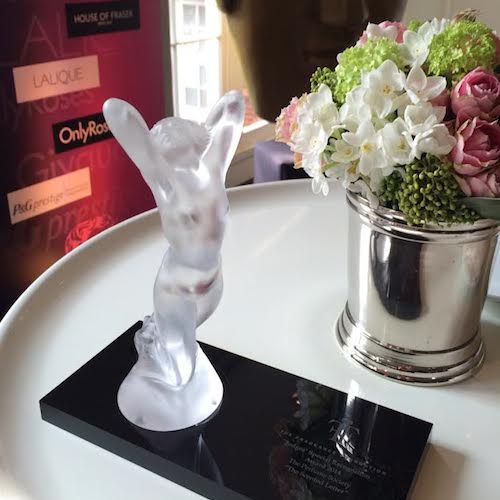 It’s not every day you get to say ‘today, as we breakfasted at BAFTA…’ but this morning, that’s exactly what we did while attending The Jasmine Awards – the premier awards for journalists writing on the subject of fragrance, and ‘The Oscars’ of the perfume world…

And (believe it or not), we were actually rendered speechless for quite some seconds – for at The Perfume Society, we were utterly thrilled/flabbergasted/over-the-moon (insert your own synonyms for giddy happiness, we’re still thinking of them!) to be surprised with a Judges Special Recognition Award for our magazine, The Scented Letter! Separate from the other categories, and created especially for us because the judges wanted to recognise and congratulate our efforts… 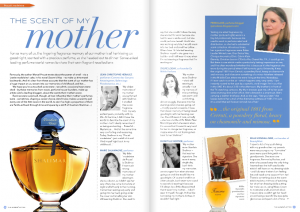 While still swooning, may we take some time to tip you the wink and usher you to our Subscriber Page – all VIP Subscibers get The [cough – ‘Jasmine Award-winning’!] Scented Letter delivered to their inbox absolutely free – If you haven’t succumbed yet, have a sneaky peek at this taster-edition so you can see for yourself what all the fuss is about…

Presiding over the event were the Chairman of the Jasmine Awards, Cécile Budge, Managing Director of P&G Prestige, and Peter Norman, Chairman of The Fragrance Foundation.

The following awards were presented…Best Article in a Customer Magazine: The judges awarded the prize to Jan Masters for ‘Dark Star’ in Harrods Magazine.

Best Digital Article on Fragrance: From a lengthy shortlist, the judges awarded the prize to Thomas Dunckley for ‘M is for Mugler – The Fragrance A-­Z’ published on the escentual.com

Best Digital Fragrance Experience: This category is for a more lighthearted fragrance feature online. The winner was Lee Kynaston for ‘How To Get The Most Out Of Your Fragrance’ on fashionbeans.com

The Jasmine Bloggers Award, a new Award this year, went to Persolaise for ‘Guardians of the Past: A Trip to Osmothèque’ on Basenotes.net

Jasmine Soundbite (magazines): The judges agreed the prize should go to Annabel Meggeson for ‘The Sexiest Scent I Know’ in Red Magazine.

Best Practical Guide to Fragrance: The judges decided that the Award should go to ‘Scents of Identity’ by Sarah Green from You & Your Wedding.

Jasmine Visual Award: This category proved to be incredibly strong but after much deliberation it was decided that the winning visuals were original and eye-catching; the prize went to ‘Beyond the Label’ from Vogue,

Most Creative Visual Award: This award was introduced in 2012, for a stand-­alone piece with minimal words which stood the test of inspiring the reader by its visual impact. The judges found this a tough decision due to the high quality of entries, but it was decided that the prize should go to ‘Pop Art’ from Harrods Magazine, words by Jan Masters, photographer Fabian Oefner.

Jasmine Literary Award: The judges decided that the winner should be Dana El Masri for ;’Reflection Eternal’ from ODOU Magazine for her beautifully written and insightful piece.

We had no idea such an award would be presented to us – and in fact were so engrossed in congratulating and Tweeting about other nominees that it took some time for it to sink in that our name had been called!

We would like to add our congratulations, not just to the winners but to everyone who was nominated – we are always thrilled to be part of The Jasmine Awards as enthusiastic audience members, but we were ecstatic to have The Scented Letter recognised as part of such a prestigious ceremony.

The winning articles are available to view on The Jasmine Awards website.