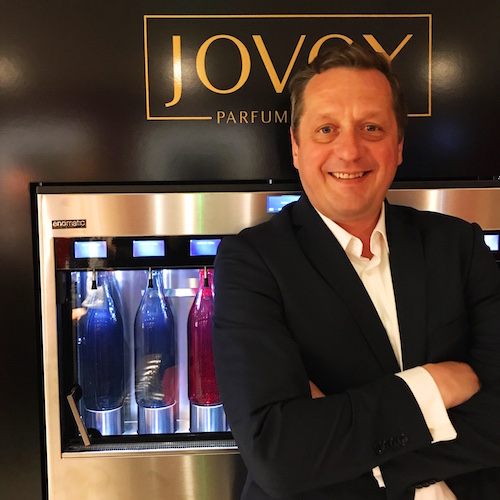 It’s coming up for Jovoy Mayfair‘s first birthday, so what better time to celebrate their arrival in the UK than by having a nose around, seeing what’s new, and thanking heaven for this niche haven in the heart of London…?

(PS: Our VIP Club Members are being offered a generous 15% discount at Jovoy between until 24th October 2018 – click here see how to claim this exclusive offer, though you’ll have to use your V.I.P. log-in to view it.

The opening of Jovoy on Mayfair’s Conduit Street in 2017 was definitely a cause for corks popping. Those of you lucky enough to go scent shopping in Paris will surely have come across Jovoy there – it opened in 2006 on the rue Castiglione – where it proved a game-changer in fragrance retail: a destination for perfumistas (from around the world, nowadays) showcasing perfume houses which had, until then, been largely unavailable. 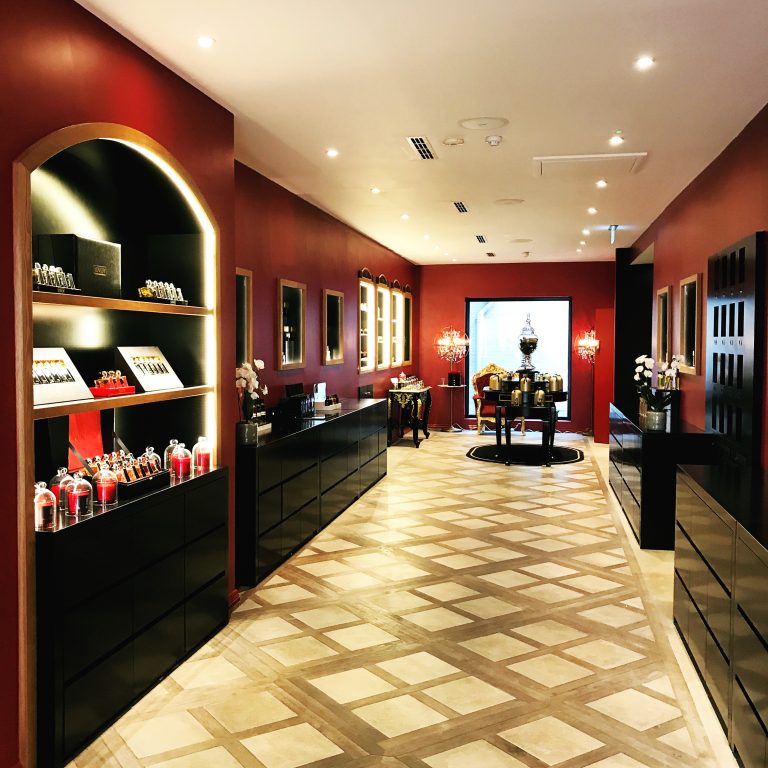 Jovoy was the ‘baby’ of François Hénin, who previously worked exploring the olfactive riches of Vietnam, distilling raw ingredients for the perfume trade. François had his finger on the quickening pulse of the fragrance world, sensing a shift away from the ‘signature scents’ and more traditional, classic houses Parisians had tended to wear in the past.

One of the things we love best about Jovoy Mayfair is the ‘staff picks’ wall – think of it a little like those windows and display shelves in bookshops where the knowledgable staff pick out new and unusual things they think you’ll love. It’s such a great place to start sniffing, especially if you’re a little nervous about walking into a niche boutique for the first time (or simply don’t know where to begin!)

Jovoy are also happy to decant some of your favourite new finds into small sample bottles, so you can try them at home and properly get to know them – a fantastic service that we’re sure means many come back to buy the full size.

Here’s a few new scents you may find there, currently… 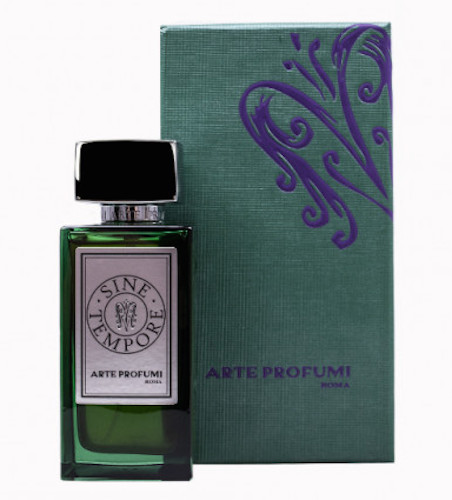 Jovoy say: ‘The latest perfume from Arte Profumi explores vetiver. Itself a highly prized and valuable raw material, Sine Tempore uses two different vetiver extractions (Haiti and Java) along with subtle does of lime and cardamom to shoot the root through with an insistent and citric, green note.’ 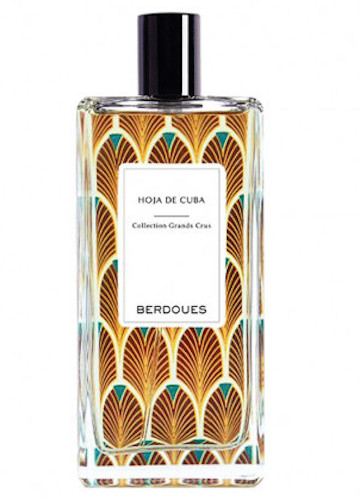 Jovoy say: ‘Hoja de Cuba is another in Berdoues’ series of Grand Crus perfumes, one that takes its cues (as the title insists) from the streets of Havana, the tobacco fields and the Cuban cigars so synonymous with them. A blend of tobacco from Turkey, allspice from Jamaica and vetiver from Haiti.’ 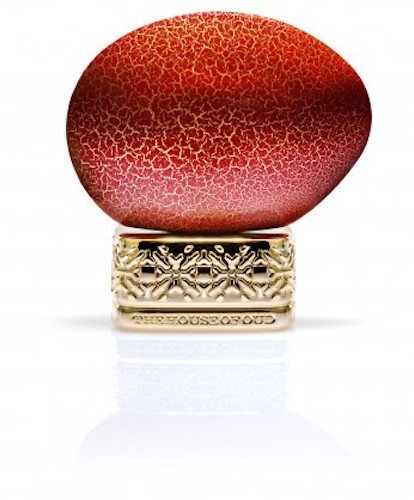 Jovoy say: ‘Rock ‘N’ Rouge is a game of looks exchanged between a ballerina and a member of the audience. Temptation pierces through the gloom in the theatre and Eros shoots his keenest arrow. Desire cuts across the stage and rolls like a thousand fiery marbles out towards the theatre stalls. There, in the glare of the first change in the lights, the star’s eyes set fire to those of the man who observes. And, as though by magic, all the rest of the audience disappears. He and she are the only ones who remain, without knowing each other, without ever touching. United by seduction, they are unconscious protagonists of a feline pas de deux, charged with electricity.’ 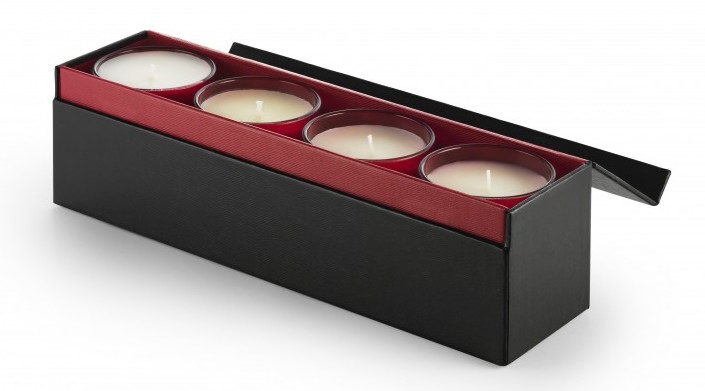 Did you know Jovoy also have their own amaaaazing candles (presented in glass domes within a scarlet red vintage style hatbox affair? Well now you can also get them in a customisable box: choose four fragrances (making 64 possible combinations). ‘Create your own candle set choosing one or several fragrances among the four classic candles by Jovoy: Ambre 1er, Datcha, Gardez-Moi and Marron. Each black coffret case is populated of four 80g red candles, each with approx 20 hours of diffusion. The hardest part will be to choose how many of each.’

While we touched on the subject of nerves earlier, let’s be real about this. Not everyone feels confident about striding in to a ritzy scent shop. We’ve spoken to lots of our loyal readers and even VIP Club Members who still can feel a bit dubious about going in any fragrance shop alone.

Rest assured, Jovoy Mayfair excel at making you feel comfortable – there’s zero pressure, they’re happy to let you browse or give advice where required, and there are pots of blotters and pencils dotted all over the place, to encourage spitzing (and of course writing the name of the fragrance on the blotter so you don’t shove it in your bag and forget which it was, later… You all do this, don’t you? *waggles eyebrows*) 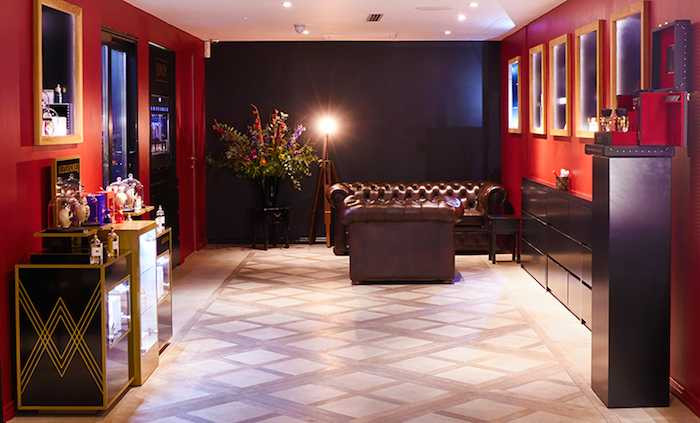 Downstairs, there’s a comfy sofa for relaxed wrist-sniffing situations, and a more private ‘frgarance fitting’ experience should you wish, as well as a fragrance dispensing machine and exhibits of rare (and sometimes priceless!) perfumes to make your jaw drop.

We’ve hosted several events at Jovoy since they opened, including a remarkable alcohol and fragrance pairing evening (which was every bit as wonderful as that sounds) and, most recently, our co-founder Jo Fairley interviewing maverick perfumer Geza Schoen about his Beautiful Mind Series fragrances. Sp, do keep an eye on our Events page to join us on another occasion.

Incidently, Jovoy have their very own Private Label fragrance range – for Jovoy is actually a revived and re-imagined fragrance house that once scented the bohemian A-List of 1920s Parisian bohemians. You can read about the history of Jovoy on our page dedicated to them.

In the meantime, we encourage you to venture forth into independent fragrance retailers and see an array of scents you’d never even dreamed existed! rom Neela Vermeire to Atelier Flou, L’Essence du Bois to Olfactive Studio, Jacques Fath to Perfumer du Monde, via Volnay, Jeroboam, Aedes de Venustus, Eight & Bob, Masque Milano and so many more (with a growing number of store exclusives, too).

Categories: Features, Slider
Tags: niche, shop, perfumery, boutique, duft, fragrance, Jovoy, scent, Jovoy Mayfair, london, review, shopping
Recommended Posts
RECENT POSTS
CHECK OUT:
LATEST FROM OUR SHOP
Follow By entering your email address you agree our blog partner (BlogLovin) sending you emails with our latest blog. You can always unsubscribe. We do not pass your information to anyone else. See our privacy policy.